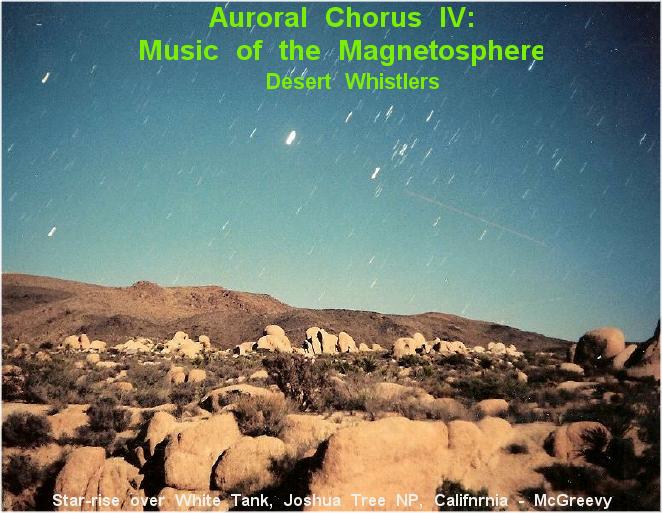 "Auroral Chorus IV" is my largest online natural VLF radio-phenomena compendium album on Internet Archive (begun in 2010 and ongoing uploads to 2017).
More than half of the MP3 audio files on this page are field-recordings of Earth's "Natural VLF Radio" signals and are quite beautiful.
The remaining recordings are totally fun-stuff I love to record and some bizarre documentation-audio-recordings too:
Radio experiments and reception - unusual and rare, highly-technical "DX" related radio reception; acoustic recordings.  All of the echo-chamber-like recordings are acoustic-only actually via a large steel tank at the Reward Mine, Inyo County, California experimental and music-group sessions (named: "The Just Reward") 2007 to 2015.
A Big Tossed Salad of audio here! - SpM - 30th December 2017.
========== * * * * * ++++++++++

In addition to the large archive of natural ELF-VLF radio recordings here, I have added a great amount of fascinating acoustic field-recordings at an old desert mine tank (fabulous and bizarre echo/resonance/reverb/effects), recordings of passing freight-trains in Nevada and Montana, and a two-part show (80-minutes-plus) on May 2006 Texas-storm-chasing I did with the infamous, intense, Richard Heene and SKYWARN (Richard Heene became the "Balloon Boy Father" in October 2009 - aka. "Science Detective" - What a cool experience in my life! - see further below.)

Beginning in July 2013, I have been experimenting with a JrF (Jez Riley French) contact microphone made in Hull, England by Jez himself. It is the new "Wind Wire" series and has the contact mic attached to a long piece of welding-wire string between two trees or other supports, clanging, banging and whistling in the wind...

Ongoing Stereo VLF recordings of sferics, tweeks, and some whistlers, are on the IA "Auroral Chorus V" page here at Internet Archives.

And so it looks like this Auroral Chorus IV page is becoming my main field-recordings page and will expand in 2013 -- VLF and acoustic!

"Auroral Chorus IV: Music of the Magnetosphere - Desert Whistlers:" At the latitudes (both geographical and geomagnetic) of the southern Great Basin Region of the western USA and Mojave Desert regions, lie the area where most of the time, whistlers are the predominant natural VLF radio phenomena. During my travels throughout the beautiful and arid western deserts, I have captured many lovely whistler events, especially in Death Valley and Joshua Tree National Parks.

2012-13 VLF/Natural Radio AUDIO (MP3) FILES CONTINUOUSLY BEING ADDED: My latest 2011 - 2013 mono-VLF-audio files (primarily California-desert VLF audio) are being added to this Album as VLF events occur that are worth recording at my southerly home-base latitude - (not optimum for fascinating VLF compared to the Auroral Zone much farther north).

Additionally, on 29 December 2010 I uploaded additional archival MP3 audio-files recorded in Canada, the UK (in London) and Donegal, Ireland, as they represent a great variety of wonderful VLF recordings I have made during my extensive travels abroad to higher-latitude locations, too.
-------
THE ENTIRETY of all of the VLF-related MP3 audio files on www.spaceweathersounds.com are here as well, plus more. This includes some audio files from my Canadian auroral-zone expeditions as just said above.
-------
Train Recordings: I made several recordings of passing trains (another recording enjoyment of mine whilst traveling) of Union Pacific trains in Nevada (Sand Pass north of Pyramid Lake) and in eastern Montana, in the Summer of 2001.
-------
Loma Prieta Earthquake recordings: It was very serendipitous that I recorded the electronic-Carillion Bells of Santa Rosa Junior College (California) the evening of 17 October 1989, exactly during the Loma Prieta Earthquake (mag. 6.9) in northern California, which occurred at 5:04:14 pm PDT (I have inserted a 1 second silence gap in this recording when I think the quake begins). In the final three minutes of this recording (which begins at about 5:00 p.m. PDT), you can hear students shouting "earthquake!" and other sounds... (I was not attending SRJC but happened to live for a spell adjacent to the college).
-------
REWARD MINE TANK: Tank experimental field-recordings were made at the Reward Mine (Inyo County, California): - an old water tank lying on its side makes for amazing audio effects of echoing, resonances, and reverb!
-------
STORM-CHASING ADVENTURE FEATURE (caution, much swearing and high-intensity):

Storm Chasing with Richard Heene (Balloon Boy Father) 14 - 15 May 2006 in Central and South Texas, USA -- I was invited by the famous Richard Heene, Science Detective, to join him on one of his truly adventuresome and intense storm-chasing adventures! Two part POD-CAST here totaling over an hour of time is here. Richard was really zany, manic, and very intense, as you will hear...

Finally here: Please support Internet Archives via a donation, no matter how small, because it is a great privilege for me to be able to put my huge amount of audio-archive recordings on this wonderful site for the world to experience and enjoy. Peace - Steve McGreevy - 01 February 2018.

public-domain for your maximum enjoyment